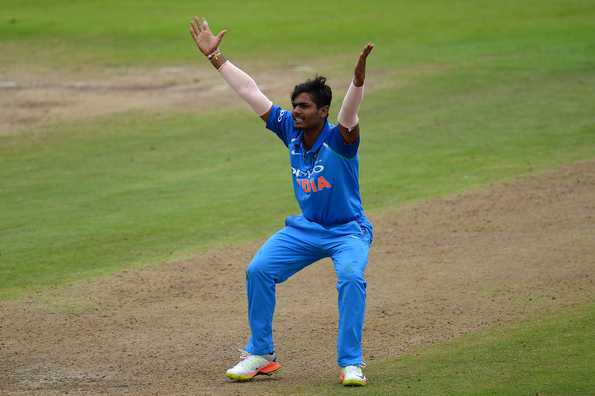 Hanuma Vihari's 95 went in vain as Hyderabad sealed a 14-run win over Andhra, and set up a clash against Mumbai in the semifinal of the Vijay Hazare Trophy.

Put into bat, Hyderabad's charge was led by Bavanaka Sandeep, who stroked a 97-ball 96. Even as there were no big contributions otherwise, the platform was laid courtesy useful partnerships all through the innings. Bandaru Ayyapa, Girinath Reddy and Yarra Prithviraj bagged a brace each but Hyderabad managed to post 281 for 8.

Andhra's response began strongly with Vihari stitching 118-run stand with Ricky Bhui for the third wicket. However, once both the set batsmen were dismissed by Mohammad Siraj in quick succession, their chase was derailed. They managed to add only 58 runs in the last 10.4 overs.

Jharkhand sealed a comfortable win over Maharashtra in a rain-shortened game at the M Chinnaswamy Stadium, to book a place in the semifinal where they will face Delhi.

Anukul Roy's four-fer bundled out Maharashtra for 181 after they were put into bat. Barring skipper Rahul Tripathi and 'keeper Rohit Motwane, who combined to add 99 of those runs, it was a dismal batting show. The duo had consolidated Maharashtra's innings with a 76-run stand for the fifth wicket but once Tripathi was dismissed, the tail managed to add only 31 runs for the last six wickets.

Jharkhand's progress was slow but with a low total to chase, there was little threat to their chase. Shasheem Rathour held the innings tight at No 3, with an unbeaten 81-ball 53. Jharkhand had managed to reach 127 for 2 in 32.2 overs when rain stopped play for the last time.