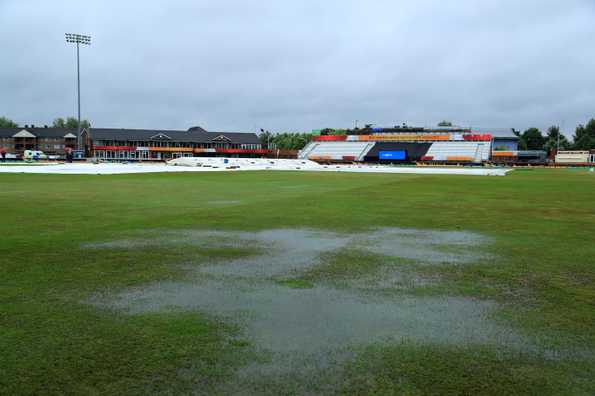 Three consecutive days of abandoned play due to rain and wet outfield at the Green Park Stadium in Kanpur ended the third Duleep Trophy match between Inda Blue and India Green in a draw without the first innings getting completed. Both teams bagged three points each and as a result, the Suresh Raina-led India Blue qualified for the final.

Only 83.5 overs were bowled during the course of the match, all of it coming on the opening day. India Green were well placed to take the first innings lead after Parvez Rasool's fifer had bundled out India Blue for 177 in the first innings. India Green's top order batsmen - Nitin Saini (25), Kaushik Gandhi (39) and Prashannt Chopra (26) got off to starts, but failed to notch up big scores. They managed to reach 100 for 3 on the opening day, but the innings couldn't resume day after.

Apart from Rasool, Aniket Choudhary, who had little role to play in the opening match, too returned with fine figures (12-4-18-3) in the first innings, accounting for the wickets of Samet Gohil, KS Bharat and Ishan Kishan. Among the batsmen, Manoj Tiwary (70) was the only half centurion in the match.

India Blue will now take on India Red in the final, set to be played at Lucknow's Ekana International Cricket Stadium, staring from Monday (September 25).

Several top players from both sides will be missing in action due to India A duties. From India Red, Priyank Panchal, Sudip Chatterjee, Rishabh Pant and Karn will be out, while from India Blue, Hanuma Vihari and Ankit Rajpoot will be missing, Their replacements are yet to be announced.