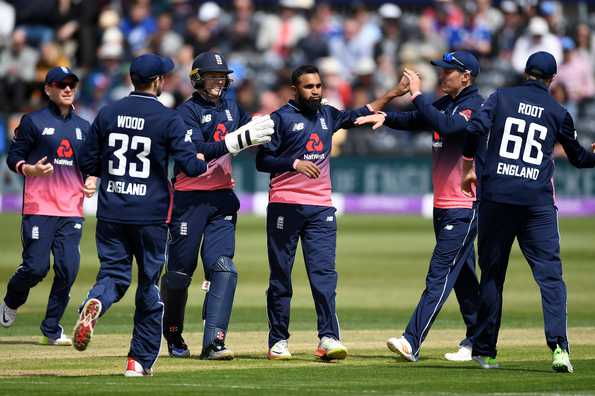 Thanks for joining us today. Here's hoping for a much better Ireland to turn up at Lord's for the second and final ODI on Sunday. Cheers!

Adil Rashid (Man of the Match): At the moment I feel confident. That (consistency) has come from hard work in the nets, knowing my field and what to do on a given day. I look to bowl my variations and be confident about that.

Morgan: Pretty pleased. Very good performance. In the first 10 overs, bowled very few bad balls. Losing the toss was not a bad thing. Any first game back is important to get some overs under belt (talking about Mark Wood). There were expectations from him. It is great to see him (Adil Rashid) bowl that way. He had some tough winter bowling against some top teams. Not taking anything away from Ireland, they have beaten us before and they have the ability to beat any team in the world.

Porterfield: We could not put a total on the board, could not get the partnerships going. There was a bit of nibble but spinners did most of the damage. I think it is more of a mental thing (to prepare against leg-spin). It is going to be great day (Lord's ODI). We had a lot of support today as well.

The chase was never in doubt despite Roy falling for a duck. Hales smashed a quickfire fifty to hasten the end, before Root and Bairstow closed things off tidily. So Ireland's first showing in England, 11 years in the making, turns out to be a timid one.

Chase has a second:

Morgan fails to control a pull shot; props to Chase actually for cramping him up. The catch is taken at fine leg who is swift to move to his right. 28 runs away are England; five minutes left for the scheduled break. Don't think they'll take the break. Common sense dictates they shouldn't.

Ireland finally see the back of Hales; a really good catch from William Porterfield to latch onto a skier. But all this does is just delay the inevitable by a few minutes.

Hales eating away at the target in a hurry. He hammers a quickfire half-century off just 33 balls. England motoring home. The writing is pretty much on the wall!

Ireland keeper Niall O'Brien drops a sitter down the leg-side off Hales. The next two balls are carted away for boundaries. That's just not good enough, especially when you're hoping to defend 126.

Still life in it?

A fairly comfortable chase you'd think. It should still be one, even though Roy falls for a duck. He was taking too many liberties, trying to mow his second ball over mid-wicket. Three deliveries after that unsuccessful attempt, he flicks one from Chase straight to mid-wicket. The very next over, Murtagh drops a tough return catch from Hales. Got to take your opportunities, even half-chances.

Three wickets in the last eight balls for Rashid and Root has left Ireland in tatters at 109/8.

Root and Rashid strike in successive overs to leave Ireland reeling at 94/5 in 23 overs. All five wickets taken by five different bowlers.

After a busy innings of 30, Balbirnie throws it away with a loose shot. So three of the top four have thrown away their starts to leave Ireland on shaky ground.

After making a quick start, breezing to 35/0 in five overs, both Ireland openers have fallen in consecutive overs. There is a bit happening with the new ball in terms of sideways movement. Some good pace and carry too, which should enable strokeplay.

Ireland have won the toss, opting to bat first

Hello and welcome everyone to the first ODI of the two-match series between England and Ireland. This is, quite surprisingly, Ireland's first trip to these shores a good eleven years or so since they achieved full ODI status. Whatever happened to 'love thy neighbour as thyself' and all that malarkey. There's quite a bit of history between these two teams actually, what with England using Ireland almost like a developmental territory. You can count on the visitors having a serious point to prove. It's a good afternoon to everyone, you can join in on the live blog by sending your thoughts to @SagarChawla90