England's impressive day out sullied by injury to Jake Ball 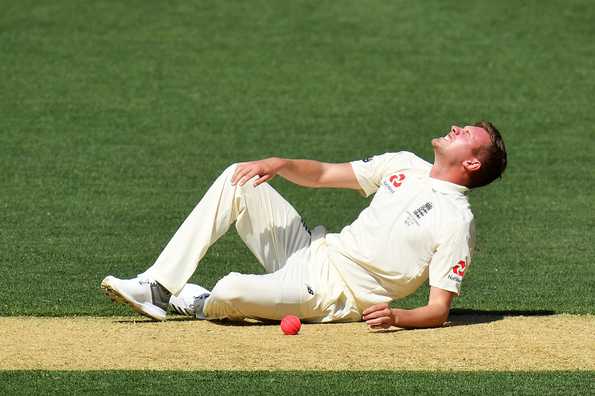 A besieged England >suffered another injury blow< to sour an otherwise >promising performance< during their four-day tour match against the Cricket Australia XI in Adelaide on Thursday (November 9).

England reached stumps on day two at 5 for 0, a lead of 65 runs, with star opener Alastair Cook unbeaten on 1 and Mark Stoneman 4 not out. Cook, who has scored just 15 runs from two innings on tour, survived an lbw appeal from talented left-arm medium pacer Jackson Coleman in the first over.

Much like his partner, Stoneman survived a shout from a confident Coleman in the third over but the openers made it through safely and will look forward to a golden opportunity to make runs on day three.

The CA XI declared on 233 for 9 just before stumps, leaving England with a tricky five overs to negotiate. It was a good recovery from the young CA XI team, who were in dire trouble at 57 for 5 before a lower-order fightback.

However, England's impressive performance was overshadowed by an injury to Jake Ball, the 26-year-old quick who suffered a sprained ankle in his fourth over during the second session and took no further part in the day's play. Ball's untimely injury compounded England's woes with experienced paceman Steven Finn ruled out of the tour earlier this week after suffering torn cartilage in his left knee.

Ball, who claimed an early wicket before the setback, was firming to play in the first Test starting on November 23 but the injury has undoubtedly threatened his prospects of a debut Ashes Test.

Moeen Ali, England's key allrounder, has not played on tour as he >recovers from a side strain<, while vice-captain Ben Stokes is >likely to miss the series< due to being part of a brawl in Bristol, which is under police investigation.

Pacemen Toby Roland-Jones and Mark Wood had >already missed selection< for the tour due to injuries. Testament to England's injury scourge, >Paul Collingwood<, England's fielding coach, was required on the field on day two as a substitute fielder.

Ball's injury soured England's disciplined performance, where the CA XI were reduced to 36 for 5 at one point before veteran Tim Paine (52) and Matt Short (45) steadied the ship with a sixth-wicket partnership of 86. Wickets were shared around with Chris Woakes (2 for 48) looking dangerous and complemented by spearhead James Anderson, who continued his excellent start to the tour with another miserly display of 2 for 30 from 16 overs.

Perhaps the most encouraging performance came from uncapped allrounder Craig Overton, who bowled accurately and he had the impressive figures of 1 for 13 from his first 11 overs. His toil was rewarded when he claimed opener Jake Carder but Overton's figures suffered after tea when he conceded 19 runs in his 12th over as CA XI's tail flourished through counterattack.

With Ball's status uncertain, Overton's performance (1 for 40 from 15 overs) was a desperately needed tonic for the beleaguered tourists and may have catapulted him into pole position for a first Test berth.

Mason Crane, the legspinner, was expensive at times as the CA XI attempted to attack him in a bid to unshackle the chains. However, Crane showcased his immense talent by knocking over highly-rated Victorian youngster Will Pucovski (4) with a standout delivery. Through expert drift and turn, Pucovski was deceived into shouldering arms and was bowled. Crane picked up a couple of late wickets including Simon Milenko, who hit an aggressive 58-ball 50 during the final session to claw CA XI back into the contest.

Earlier, England were bowled out for 293 with skipper Joe Root (58), Dawid Malan (63) and opener Mark Stoneman (61) scoring half-centuries but, frustratingly for them, none was able to register the team's first individual ton of the tour.

In a worrying sign, England struggled against the turn of 21-year-old spinner Daniel Fallins, who starred with 5 for 73 from 22 overs, while Coleman finished with 3 for 72.

The first class match is deemed as vital practice for England ahead of the Ashes series and, in particular, the historic day-night Test next month at the Adelaide Oval. Results are almost trivial at this point, as a desperately unlucky England - with one more scheduled four-day tour match before the first Test - just hoping to get through unscathed ahead of the Ashes.