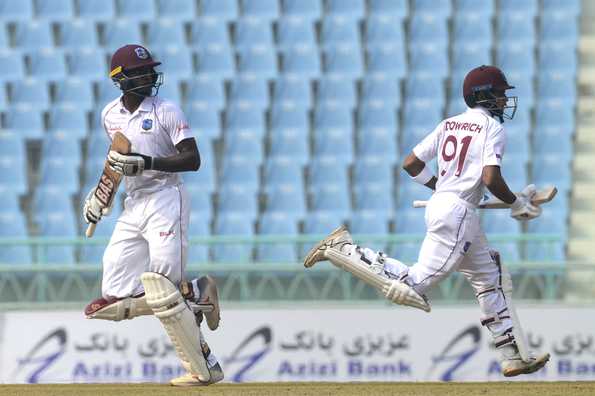 Afghanistan struck back with a rush of wickets to keep West Indies' lead in control, but they couldn't stop Shamarh Brooks to power through to his maiden Test ton at the Ekana Stadium in Lucknow. Breaking the stand between Shane Dowrich and Brooks that fetched 74 for the sixth wicket - West Indies' highest sixth-wicket stand of the year - Afghanistan got their inlet. Given how West Indies started the day, Afghanistan will be stoked with their fightback to pick up the remainder of the five wickets in the session, bowling West Indies out for 277, with a lead of 90 by Tea on Thursday (November 28).

Rashid Khan continued to pose questions on a deteriorating wicket, beating the batsmen a fair few times. Still extracting turn and bounce, he flummoxed the batsmen with his guile and wily legspin. But the break didn't come. It was Zahir Khan, who managed to break the fifty-run stand, beating Dowrich on the inside edge for 42. Jason Holder was stumped, and Rahkeem Cornwall was adjudged leg-before despite a huge inside edge as West Indies were crumbling. Amongst it all, Brooks stood tall and reached his maiden Test century - a knock of perseverance and grit. Amir Hamza then delivered the final blows, angling in an arm ball to Brooks, who went for the slog-sweep for 111 before trapping Kemar Roach leg-before to return his maiden five-wicket haul. And in his debut innings.

There was heavy fog in the morning with visibility levels being pretty low as conditions were tough to play in. However, play started on time and runs flowed upfront. John Campbell got to his maiden Test fifty, before Afghanistan dented West Indies with quick wickets. It was Hamza who provided Afghanistan with the inlet once again, breaking the overnight stand that was nearing a century. Ihsanullah pulled off a stunner in the region of a leg-gully. Campbell went for the paddle sweep and lobbed one to the fielder, which put an end to his impressive innings of 55, that came off just 75.

Shimron Hetmyer's dismal run in Test continued with another failure. Rashid Khan, who was getting lots of turn and bounce, forced another poor score after trapping him in front with the legbreak as West Indies lost two wickets in the opening hour. Replays showed that the ball may have missed leg stump, but given Hetmyer's uncomfortable stay in the middle, it was only a matter of time.

Brooks, meanwhile, continued unperturbed scoring his second consecutive Test fifty, which came at a vital time with wickets falling at the other end. Despite the wickets, runs came at a brisk pace as the batsmen found the boundaries regularly. The dependable Roston Chase fell cheaply to Zahir Khan, failing to negate the turn and dip and ended up with an edge to short leg as Afghnaistan's spinners were causing all the damage. Rashid would've had another had it not been for Afsar Zazai putting down Brooks when on 59.