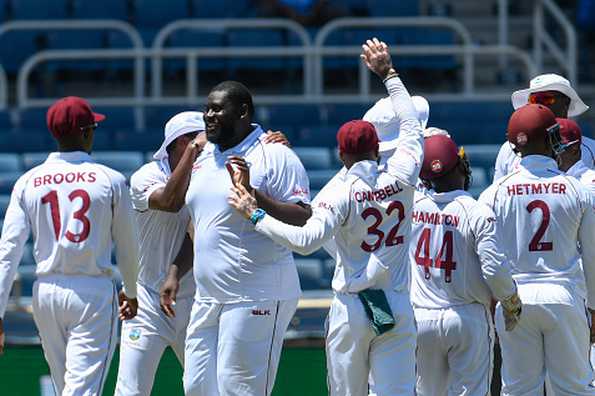 Hosting its maiden Test match, Lucknow's Ekana Cricket Stadium offered a perfect battle between bat and ball in the first session of Afghanistan's only Test against the West Indies as the visitors edged ahead, courtesy a last-minute wicket at the stroke of lunch.

On a track that bore the recent history of low and slow spin, West Indies skipper Jason Holder, quite surprisingly, decided to bowl with a 3-2 spin-heavy attack. Presence of moisture or overhead conditions? Either way Holder soon realized that the pacers may not get the expected assistance and turned to his premier spinner - Rakheem Cornwall - eight overs into the game. The decision to do so paid rich dividends as the off-spinner removed Ibrahim Zadran in his third over and kept a tight leash throughout his near-twelve-over spell.

Cornwall's spin-partner Jomel Warrican, playing his first Test in 2019, backed him up with clever mix of sliders and fast darts which eventually led to the dismissal of the other opener - Javed Ahmadi - who threw it away in quest of big hits. Moments before lunch, Cornwall succeeded in nipping out a confident-looking Ihsanullah, managing to tilt the favour just by that much towards the end of first session.

If the pre-lunch session is anything to go by, this Test seems to be ruled by the quality of spin and West Indies might have a challenging task if they are to bat last on this already-spin-friendly track.