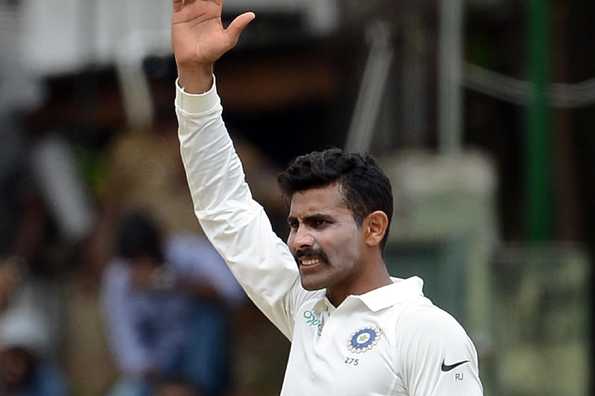 Jadeja scored an unbeaten 70 in the only innings that India batted before picking up seven wickets across two innings, including a fifer in the second to star in his team's victory by an innings and 53 runs.

>Cheteshwar Pujara< and >Ajinkya Rahane<, who both scored centuries in the Colombo Test, also moved up in the >ICC Test Player Rankings for batsmen<. Pujara climbed up one spot to occupy the No. 3 position for the first time in his career while Rahane entered the top 10, climbing five spots to reach number 6.

For Sri Lanka, who have lost a Test series at home against India for the second in succession, there were a couple of positives. Kusal Mendis's 110 in the second innings helped him climb 10 spots to slot in at the 19th position, while Dimuth Karunaratne jumped 13 places to be ranked 24th following his knock of 141.

Meanwhile, >Moeen Ali's< splendid all-round performance in the final Test of the four-match series against South Africa has propelled the England all-rounder to a career-best spot in the rankings for batsmen. Moeen essayed a vital hand of 75 in the second innings and picked up seven wickets for the match to secure England's 3-1 >series win<. The 30-year-old's fine show with the bat helped him to vault three places to slot in at the 21st position in the rankings for batsmen.

>James Anderson<, the veteran England seamer, bagged seven scalps in the fourth Test to overtake R Ashwin and grab the second spot in the bowlers' rankings. Jonny Bairstow, the England wicketkeeper-batsman, also shone brightly in the Old Trafford Test, compiling a crucial knock of 99 in the first innings. On the back of his noteworthy show in the first essay, Bairstow now sits at No. 7 on the batting charts.

Among the South African batsmen, Hashim Amla compiled a fluent hand of 83 in the second innings to move one place to ninth in the rankings. Duanne Olivier, who snared five scalps in the fourth Test, was rewarded with a career-best ranking of 51.