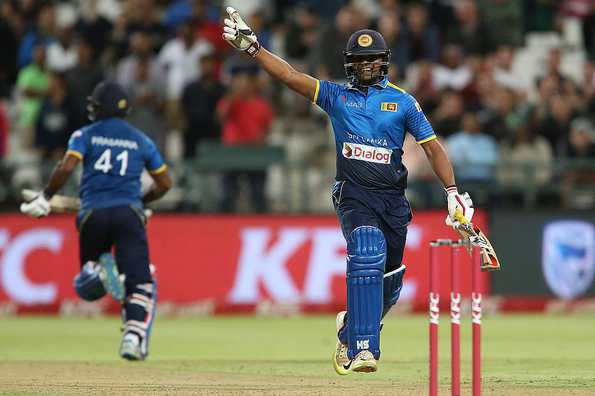 Who would have thought this would happen 15 years ago Even the most optimistic of those wouldn't have put their money on Sri Lanka with five batsmen back in the pavilion in five overs. This victory has to go down as one of Sri Lanka's finest chases in Twenty20 cricket. The tourists have clinched another last-ball thriller to take an unassailable 2-0 lead in the three-match series, and maintained their unbeatenT20I winning streak against Australia in Australia. Aslea Gunarathne - the star of the match - 84 not out off 46 balls.

Asela Gunarathne is going strong, he has kept the boundaries coming. But in the process of reducing the required runs, Sri Lanka have lost another wicket. James Faulkner strikes, Sekkuge Prasanna is back in the hut.

Chamara Kapugedera and Asela Gunaratne steadied the Sri Lankan innings after the top order was back in the dugout in the powerplay itself. By the time, Kapugedera departed, the equation had reduced to 82 off 45 balls. The stand has opened up Sri Lanka's chances in the match. Six wickets down, the challenge is tough, but Australia can't breath all that easy.

They are folding up much faster than they would have liked. Andrew Tye, the fifth bowler introduced by skipper Aaron Finch in the fifth over has struck twice in two balls to send Dilshan Munaweera and Milinda Siriwardana back to the dugout. At the moment, it would be quite a classic, if Sri Lanka manage to give Australia a challenge. 41 for 5.

James Faulkner and Jhye Richardson, bowling the third and fourth overs too struck and got off the mark in the wicket's column. Sri Lanka's top order, the one that had laid the platform for their victory in the previous match, is back in the dug out. They desperately need a partnership to get going.

Ashton Turner, the offspinner, made the initial incision by bagging the vital scalp of Tharanga. It was actually a seam-up delivery that swung a bit in the air and Tharanga could only lift it to deep square leg.

Despite a steady fall of wickets in the slog overs, Australia finished up with a noteworthy total of 173. Henriques was the star performer as he landed the blog blows and picked up quick singles and twos to accumulate a well-constructed fifty.

For the visitors, Malinga and Kulasekara showed their wisdom of experience by bagging a slew of wickets in the death overs. If Malinga, the lynchpin of the attack, took two wickets in his last two overs, then Kulasekara struck to the old maxim of bowling full and straight to land three blows in the final over. Barring a below par effort in the field, it was a satisfactory show from the tourists.

Moises Henriques glued Australia's innings together with an enterprising fifty. Despite Sri Lanka striking at regular intervals after the 13th over, Henriques was able to up the tempo. The way he crunched a four and a six off Vikum Sanjaya in the 18th over illustrates the point. Henriques, however, lost his partner at the other end, Paine, with the wicketkeeper-batsman getting prised out LBW by Malinga.

After putting up a shoddy show on the field for so long, Milind Siriwardana took a blinder to send Ashton Turner back to the dugout. Just making a statement - they aren't that bad in the field, afterall.

Yet again, a Sri Lankan fielders messes up an easy chance, but the bowler makes up for it by getting the batsman out caught behind. This time, the batsman in question is Travis Head, Dilshan Munaweera the fielder and Nuwan Kulasekara the bowler. Second wicket in quick succession. Poor fielding has luckily not gone on to prove costly for the tourists.

Michael Klinger may not have looked dangerous so far, but he has found enough time to settle in. His slog off Lasith Malinga goes to Chamara Kapugedera near long on, but he drops a sitter, which then races away to the boundary. However, the batsman's luck doesn't last too long. He edges one to the wicketkeeper and hands Vikum Sanjaya his second wicket of the innings.

Sri Lanka have managed to take the pace off the ball and forced the Australian batsmen - Michael Klinger and Moises Henriques - to put power into their shots. They haven't been able to score as freely and the run rate has come down. The tourists have pulled back well after Ben Dunk's blitz.

Asela Gunarathne has ended Ben Dunk's big bash party. The southpaw goes for a wild slog, misses the line of the delivery and loses the stumps. A much needed break for Sri Lanka as he was taking the game away from them. The challenge will now be to keep the run rate back in check.

While Michael Klinger is having a bit of difficulty to get going, Ben Dunk has taken little time to start smashing the bowlers. Having come into the match for Adam Zampa, the southpaw has clubbed two massive sixes and three boundaries in his first 10 deliveries. Boom! Boom! Boom! The balls are flying all over the park.

Vikum Sanjaya, who had Aaron Finch in a bit of trouble with the away swinging deliveries eventually manages to dismiss him. The Australian skipper tried to close the face of the bat and play the ball through the leg side, but ended up getting an outside edge back to the bowler. Easy catch, soft dismissal.

Sanjaya has managed to do what Nuwan Kulasekara hasn't in conditions conducive for the seamers - maintain the right channel. While the youngster has bowled a tight line, the veteran has been all over the place.

Australian openers Aaron Finch and Michael Klinger have come out to bat, while Lasith Malinga has taken the new ball. The Australian skipper gets off the mark with a crunching shot for a boundary. Positive start for the hosts.

Upal Tharanga, Sri Lanka skipper, won the toss and elected to field. Jhye Richardson has got his T20I cap. He has come in for Billy Stanlake, who conceded 42 runs off three overs in the first match. Ben Dunk also gets a look in, in place of Adam Zampa. Sri Lanka have made one change to their side with Kusal Mendis coming in place of Lakshan Sandakan.

Led by Anna Peterson's last over hat-trick, New Zealand went on to defend 69 runs in 13 overs and win the second Women'sT20I in Victoria. You can check out the full scorecard of the match ><

Hello and welcome to the second Twenty20 International between Australia and Sri Lanka, set to be played in Victoria's Simonds Stadium. The visitors have taken a 1-0 lead in the series after clinching a last-ball thriller at the Melbourne Cricket Ground, and will look to seal the series here on Sunday. Australia are yet to beat Sri Lanka in a T20I match at home. In fact, Australia haven't won a T20I at home since November 9, 2014. Will the second-string side end the drought or will they concede the series?

We will bring you the live updates of the contest here.