Herath five-fer pushes Zimbabwe on the brink of defeat 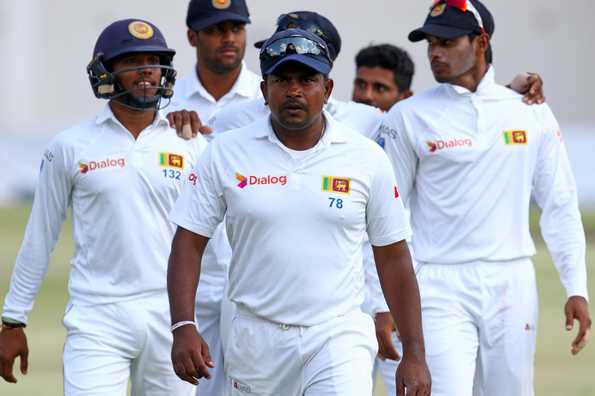 As expected, by the end of the fourth day's play, Sri Lanka had made rapid progress towards inflicting a series whitewash on Zimbabwe at the Harare Sports Club on Wednesday (November 9). When action resumed, the visitors were well placed, looking to time their declaration well, or rather better than what they did in the first Test.

While the first session was sedate with only 75 runs scored, the second session set the tone where the tourists took the onus on themselves to score quickly, declare with a 490-run lead and nip out a couple of wickets too by Tea. At stumps, Zimbabwe were left reeling at 180 for 7 with 311 more needed to win.

Even the most optimistic Zimbabwe fan would be worried about how long would the hosts last on the final day. With just three wickets remaining, it shouldn't take too long for the tourists to wrap it up with Rangana Herath, who ended the day with 5 for 45 to his name, likely to do it all on his own.

Earlier in the morning session, with 334 runs and six wickets in the kitty, the tourists just had to come out and bat the hosts out of the contest. Dimuth Karunaratne had been in rich vein of form with his third half century this series while Asela Gunaratne came into the second essay, fresh from his maiden Test ton in the first innings.

But by lunch, the Lankans could add only 75 runs to their lead to stretch it to 409 runs, losing Gunaratne (39) in the process, who failed to block an in-dipper from Donald Tiripano in the 61st over. The Sri Lankan batters didn't push the envelope much while Zimbabwe were happy to play the waiting game. Although the wicket seemed to have broken up considerably, the bowlers didn't quite get any remarkable purchase.

In the following session though, Sri Lanka took a U-turn on its approach with Kusal Perera leading the attack with a flurry of boundaries. Going after the Zimbabwe skipper, Perera hit Graeme Cremer for three boundaries in the 76th over, bringing up his second fifty of the series. In the same over, Herath (4) departed when he went for a fancy slog sweep off a fullish ball to find his stumps shattered. Prior to that, opener Karunaratne (88) failed to reach his fifth Test ton while playing across the line to a straight delivery from Chris Mpofu. Perera (62) and Suranga Lakmal added 49 runs for the ninth wicket before the former perished, trying to hit Cremer beyond the fence in the 82nd over.

Having set a towering target of 491 runs to win for the hosts, Herath led the obliteration by picking up the top-scorer from the first innings, Brian Chari (8), with an arm ball that sneaked right between his bat and pad for the stumps to be rattled. While Hamilton Masakadza countered Herath's turn with a big sweep in the eighth over, he too, much like Chari, failed to pick the arm ball before being adjudged out leg before in the penultimate over of the session.

The final session began with Zimbabwe having their backs right against the wall and it didn't help when Tino Mawoyo (15) edged a sharp, low catch to Dhananjaya de Silva at first slip off Herath who by then had picked up his eighth wicket in the match. The two most promising left-handers in the side, Craig Ervine and Sean Williams, got together with the sole purpose of arresting the fall of wickets. That they did but with a brief counter attack from Williams who raced away to 19 with four boundaries off just 11 deliveries.

While the duo provided a ready tutorial to their other teammates on how to bat on this wicket, Williams slog swept Dilruwan Perera over deep mid-wicket for a six to bring up the 50-run stand for the fourth wicket.

Ervine took a liking to Dilruwan's bowling too, picking up back to back boundaries in the 26th over. Just when Williams and Ervine were imposing themselves on the tourists, Lahiru Kumara forced the former into a pull shot and the substitute, Lakshan Sandakan, dropped a vital catch at the edge of the fine leg fence. The pair couldn't capitalise on the major blip though, as a couple of overs later, poetic justice prevailed with Williams (45) edging one into the hands of the keeper in the 29th over.

Malcolm Waller disappointed for the second time in the match as de Silva sucked him into a defensive prod to produce an edge, dismissing him for a golden duck in the next over. Lahiru Kumara found a chink in Ervine's armour as he created half-chances bowling short at the left-hander who escaped narrowly with top edge pulls.

The young keeper-batsman Peter Moor once again showed promise with free flowing strokes against Herath, driving him for two fours in the 33rd over. Ervine collected back to back fours in the next over to raise his second fifty of the match in the 35th over. The closest the Lankans came to separating this pair was when Moor didn't play a shot to an arm ball from Herath in the 36th over and the review suggested that the impact was just outside off.

Just when the duo looked solid with the fifty up for the partnership, the silly point fielder snaffled an outstanding reflex catch of Moor (20) with Herath picking up his fourth wicket of the innings, leading the wicket-takers tally in this calendar year with the 50th scalp. Cremer came out to bat but could only last ten deliveries before the Lankan skipper unleashed a ripper to spin it past the defensive prod, castling him for just five. With Zimbabwe staring at a huge defeat, the final day seems to be a mere formality.