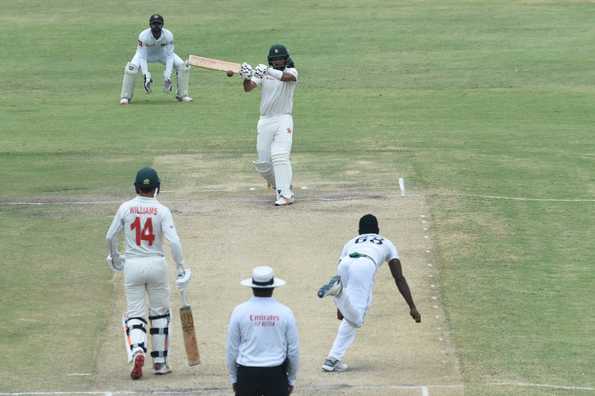 Rain foiled Zimbabwe's hopes of a final flourish before a declaration when a sudden downpour took players off the field midway through the second session on Day 4. Umpires called for an early Tea break at 14:35 local time with Zimbabwe leading by 335.

Sean Williams, in particular, would be disappointed by the inopportune timing of the rain with the Zimbabwe captain leading the final charge with a brisk 65-ball 40, a worthy follow-up act to an excellent half-century from Brendan Taylor (67) in the opening session. Williams put on 70 with Sikandar Raza (34) before the latter was adjudged LBW - contentiously - to Vishwa Fernando. New batsman Tinotenda Mutombodzi had played just four deliveries when it began drizzling and eventually transforming into a heavy downpour. The hosts had added 43 runs in a little over one hour after Lunch.

Zimbabwe, expected to draw curtains on their second innings, continued to call the shots in this engrossing Test match largely through Taylor's efforts in the morning. The pace of his knock of 67 - scored off 75 balls - was particularly vital to the progression of the game, so as to give them enough time to try and bowl Zimbabwe out.

The hosts didn't enjoy the best of starts to the extended opening session - to compensate for the loss of play last night - with Lasith Embuldeniya taking out Regis Chakabva in his second over of the morning. Taylor though took full toll of his head-to-head advantage over the left-arm spinner, pulling out the sweep off his second delivery. In Embuldeniya's next, Taylor used both a reverse swat and a reverse sweep to inject momentum into the Zimbabwe innings.

Sri Lanka were quick to acknowledge this 1v1 dynamic and quickly brought on Vishwa Fernando into the attack, even though Embuldeniya could so easily point at the drop catch by Fernando for his failure against Taylor. The Zimbabwe batter though kept finding the boundaries to keep the scoreboard ticking even as Prince Masvaure played on as a passive partner. By Drinks in the first session, the pair had added 37 with Taylor scoring 30 off 38 deliveries. Eventually, it was a miscommunication that ended the association, with Masvaure looking for a non-existent second run and falling short at the non-striker's end when sent back.

Timycen Maruma fell for a 14-ball duck but Taylor maintained the tempo, hitting a four of Embuldeniya and a six off Fernando while passing 2000 Test runs in the process. He completed a crucial half-century but was given out LBW towards the end of the session - another dubious decision from Nitin Menon, when it appeared that Taylor had possibly inside-edged the Lahiru Kumara delivery on to his pads. Sri Lanka sensed a window of an opening but senior pros Sikandar Raza and Sean Williams kept them a bay with a flurry of boundaries that took the hosts past the 300-lead mark, only for rain to derail their plans somewhat through the second innings.