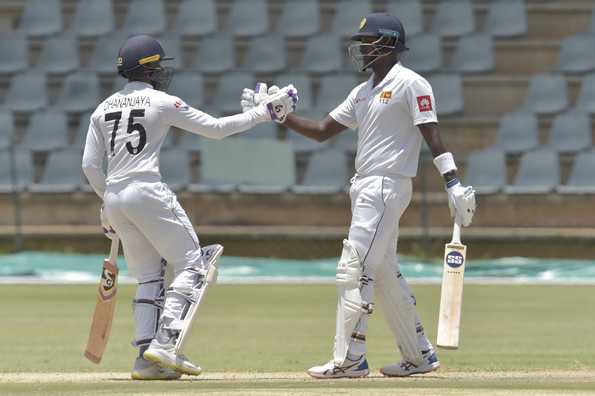 Angelo Mathews led Sri Lanka's reply to Zimbabwe's 406 with a solid unbeaten fifty display after the visitors lost three wickets in the opening session. Despite losing Kusal Mendis and Dinesh Chandimal early on, and Dhananjaya de Silva on the brink of the break, Sri Lanka ate into the deficit to trail by 180, going to Lunch on Day 3 on 226 for 5.

Starting the day on 122 for 2, Mathews led the way once again, along with Kusal to keep Zimbabwe's bowlers at bay. It wasn't until a freak dismissal that Zimbabwe got Kusal, but lost fielder Kevin Kasuza in the process who was struck on the head and was sent for subsequent scans. A half-tracker from Sikandar Raza was pulled flush into the helmet of the forward short leg fielder, Kasuza, the deflection from which rose to the square leg fielder, Mumba, who completed the catch. Although Zimbabwe made inroads, they were quite concerned with Kasuza being carried off the field.

Raza then struck in his next over to get Chandimal, putting an end to the batsman's panicked stay in the middle with a return catch. Mathews thereafter, with Dhananjaya de Silva, added over fifty runs for the fifth wicket, letting the latter take on the bowling, while the pair rotated the strike well to keep the scoreboard ticking. Raza picked up his fourth wicket, ending the 84-run stand heading into Lunch, knocking de Silva's stumps out for 42, who was looking to slog a few.

Sri Lanka showed great discipline against the pacers but were a tad too aggressive at times against spin, which cost them two batsmen - Mendis and de Silva - in the session. Mathews, however, milked his prime form from the previous game to score yet another fifty, unbeaten at the break.