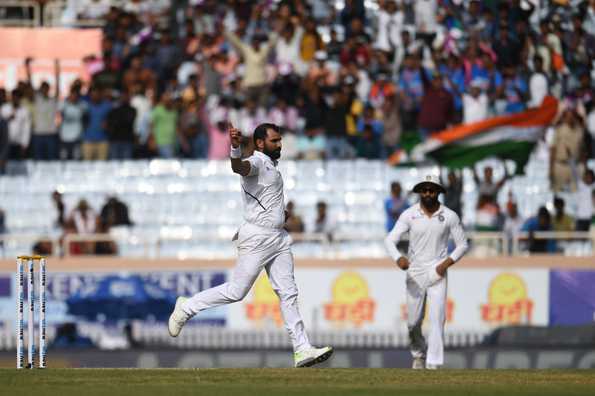 Two dramatic Faf du Plessis dismissals, punctuated by an extended afternoon session, bore witness to the kind of day India had in Ranchi. The value proposition of the dismissals wasn't just in how du Plessis, the South Africa captain, fell twice in a space of few hours; it was also in how he got out, first bowled by Umesh Yadav's away-seaming delivery and then caught leg-before by Mohammed Shami's in-dipper. It was India's fast bowlers moving the ball in both directions all day, slowly chipping at this South African batting line-up, which lost 16 wickets on Monday (October 21) and was made to follow-on in consecutive Tests for the first time since 2001.

Having started the day on 9/2, South Africa were bundled out for 162 in the first innings. Du Plessis's dismissal to Yadav in the first over of the day spelt doom but South Africa resisted through a breezy 91-run stand, compiled between Zubayr Hamza and Temba Bavuma for the fourth wicket. Hamza even brought up his maiden Test fifty, negotiating difficult deliveries from the seamers softly through the slip cordon and punishing anything loose. Both Shami and Umesh were pasted on both sides of the wicket, right when India's poor bowling could no longer masquerade as being attacking. Even Ashwin's round-the-wicket angle to Hamza failed -- the offspinner conceding 37 runs in his six overs.

That was when Jadeja's arm-ball, bowled skiddier and quicker after India lost a review on Hamza previous ball, helped. Not anticipating Jadeja's wits, Hamza made room and lost his stumps, the realisation that you don't do that against Jadeja coming to him a bit too late. Bavuma would soon fall stumped to Shahbaz Nadeem, giving the left-arm spinner his maiden Test wicket. Despite four wickets in the morning session, South Africa managed to add 120 runs, mainly thanks to Hamza's free-flowing batting.

George Linde and Anrich Nortje provided another resistance for the ninth-wicket, the partnership for South Africa which has faced over 100 overs now in the series. Linde (37 off 81) and Nortje (4 off 55) added 32 runs across 18.2 overs, frustrating India to the core in the middle session. It was a fast bowler delivering the breakthrough for India this time. Umesh, refreshed in a new bowling spell, had Linde caught at slip. Virat Kohli decided to enforce the follow-on, for the record eighth time as captain, and it all went south for the visitors from then on.

That Dean Elgar was hit on the helmet by Umesh and the Tea was taken three minutes before schedule should sum up the third afternoon. South Africa were reeling at 26 for 4 at Tea, three of those wickets going to Mohammed Shami alone. He was fast and straight and sharp; South Africa not so much.

Quinton de Kock was the first to go, losing his off-stump to Umesh's skid and seam movement. That's when Shami took over, getting Hamza bowled with a peach of a delivery; the off-stump was sent cartwheeling. He followed it up with du Plessis's lbw to an incoming delivery that kept low and straightened. Bavuma was caught behind while trying to defend outside off.

Elgar had survived through the testing spells but failed to judge the length of a short ball from Umesh. Umpires called early Tea to try and make time for the concussion procedure. He didn't come out to bat after the break and it was later revealed that he had been ruled out. Theunis de Bryun was named as the concussion substitute.

India picked another four wickets in the final session. Heinrich Klaasen was trapped leg-before by Umesh and Linde fell to a run-out, falling second to Shahbaz Nadeem's direct hit. Ashwin struck with Rabada's wicket in the final few minutes but India failed to close the match in fading light. They will now come out tomorrow, in all likelihood the final day of this mindbogglingly one-sided Test series, to pick the final two wickets.