Pakistan get ready for finale of a historic series 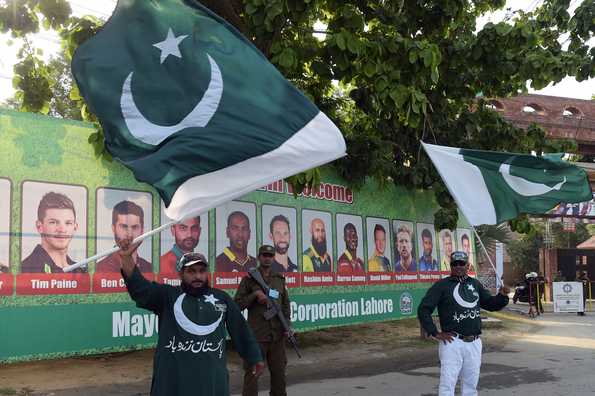 The series might be tied at 1-1 but Pakistan, as a country, is already a winner. There have been a few administrative issues - >ticket prices< and tight security measures - impeding people from thronging the Gaddafi Stadium but that aside, the quality of cricket and the response world over has been nothing short of phenomenal.

A tightly-packed schedule means that the players will be back on field on Friday (September 15) for the third and last T20I of the >Independence Cup<. Although a short series such as this with only T20Is - and one party having a mix of players from different teams - does not allow enough room to assess the opponent, both teams by now should have at least some idea about what to expect going into the decider.

Before this series, only a couple of World XI members had the experience of playing in Pakistan and that was evident during the the series opener when Faf du Plessis's side fell well short of the target. However, once the players got used to the conditions, they came back strong to level the series.

As Du Plessis said after the second T20I, the World XI bowlers were able to restrict the late charge from the middle order. Pakistan's batting so far has looked a bit one dimensional with Babar Azam and Shoaib Malik doing the bulk of scoring and the rest playing around them. While both of them, particularly Malik, can tonk around when needed, Pakistan need a big hitter at the end of the innings. The kind of expertise Thisara Perera or Darren Sammy add to the opposition's table has been missing in the Pakistani ranks. Imad Wasim, to an extent, can fit that role but for him to optimize the potential, Pakistan will have to introduce him a bit early in the batting order. Sarfraz Ahmed, like he did in the last game, can continue to bat below Imad.

World XI are free of such headaches; a win before the decider relieves captains of complex worries about the best combination unless, of course, necessitated by an injury at the last moment. They bat deep and Hashim Amla too has found his touch, as seen in the previous game.

From a spectator's point of view, Pakistan's loss in the second game did not hurt anybody. If anything, it only ensures that the last match will pull in more people, strengthening hopes of having a full-house at last. Also, a good turn out will be indicative of the fact that Pakistan is willing to accommodate extra security measures as long as it helps restore international cricket in the country.

This is a series about reveling in the moment while trying to execute skills of the highest order. Despite the best efforts of the players to keep the focus on cricket, it's nostalgia and hope - that this series has tilled - which continue to dominate the narrative. A generation of cricketers were deprived of international cricket at home for no fault of theirs. But now foundation for return of international cricket has been laid. Like Chairman of ICC's Task Force on Pakistan, Giles Clarke, said the other day, 'it's more than just cricket.' Lahore is likely to burst crackers on the night of September 15, irrespective the result of the match.

Pakistan: Hasan Ali, who had to sit out due to a back issue, is likely to return to the side.

Babar Azam: It's obviously difficult to play your own home series away from home. Playing at home is relatively easy for us

Faf du Plessis: I expect the third match to be in similar conditions and hope to continue the form.