Lahore's passage from apprehension to mere enjoyment of the sport 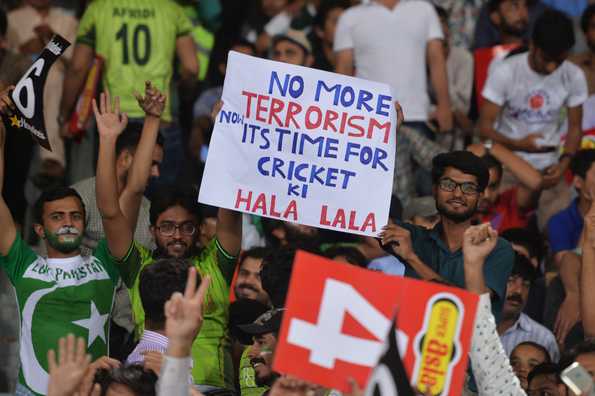 Lahore is home to many cliches. It has long been known as the cultural and culinary capital of Pakistan, though the cultural industries have migrated to Karachi and the reputation for food is probably earned because of the considerable appetites of Lahoris rather than the quality of their food.

Lahore is also known as the heart of Pakistan, which more than being an emotional connection is perhaps a reflection of the overindulgent approach the state takes to a city that often holds the key to national power.

But on nights like the one on Wednesday (September 13), it is hard to resist the magic and charm of this glorious city. A strong evening wind blew away the muggy heat of the previous night, and with it seemed to rejuvenate the Lahoris in the crowd who lived up to their reputation as big-hearted, fun-loving people. Unlike the first T20I of the >Independence Cup between Pakistan and the World XI<, the crowd for this second match was fitting for the occasion. Loud and boisterous throughout, they brought this series to life.

There was an audible buzz and excitement right when the match began, and the fans were particularly generous to the visiting players. Much like when Zimbabwe visited in 2015, the fans would scream out the names of whoever was fielding on the boundary. David Miller, one of the more famous players, was courted throughout the night and the South African responded by interacting with the crowds and chatting to the ball boys.

There were also a few shouts for honorary Pakistani citizen Darren Sammy when he came on to bring the drinks. Sammy had been the only one to generate excitement from the otherwise lackluster crowd last night, and one can only imagine how much he would have brought the house down had he played this match.

But the loudest cheers on the night came Hashim Amla's way. The soft-spoken batsman's humility and faith had already had him endeared by the local crowds, and the aura he brought with him furthered the excitement. Every time he would walk towards the boundary the stands would explode with chants of his name until he would gently wave a hand at them, at which point they would get even louder. It wasn't quite the stadium-shaking noise that we have heard in the past, but it was certainly reminiscent of it.

But Amla made his presence felt beyond just the crowd's appreciation. Arguably the best player in the World XI side, he showed off his class straight from >the start of his innings< and stayed till the end as his team >mopped up the chase<.

His first boundary was a typically wristy shot, and by the time he gently stroked Usman Shinwari for two more delectable fours, there were excited journalists in the media box urging their colleagues to join them in the stands, in order to truly enjoy the atmosphere.

The monk-like batsman continued to light up the night, ending with a further two boundaries and couple of sweetly struck sixes. The generous crowd was less boisterous when he was batting, but they were supportive nonetheless.

Amla later, expressed his delight at hearing the opposition crowd chant out his name, and as he noted, of just about all his teammates. He noted that it was the most obvious difference in his experience compared to his last visit, which was a full tour with South Africa a decade ago.

The successful chase by the World XI also brought a lot more context and excitement to the series. After the rather comfortable win for the home side in the first game, there was a concern that the event would lack the intensity of a regular international. It certainly seemed as if Pakistan had taken the foot off the gas a bit, as they were below par in the death overs of both innings.

Their batting didn't quite explode at the end of the first innings, and their bowling and fielding came slightly apart at the end of the second. A crucial dropped catch, several fumbles and a host of missed yorkers meant that Thisara Perera and Amla plundered 69 runs in the last 5.5 overs to wrap up the case, which leaves Friday's game as the series decider.

And given the crowd and excitement on display yesterday, it feels like the finale will be a grand one. Of course, a loss for Pakistan won't exactly be a disaster, but the series being wide open for the final match provides a lot more excitement.

Indeed, there was a moment during the chase when Amla was batting, when the crowd was humming and the game was opening up, that all the conversations about security and goodwill seemed to melt away. Suddenly, it was just about watching a world-class batsman play, simultaneously being excited by his skills while also praying he would get out. Suddenly, it was about enjoying the sport, and being caught between love for the game and love for the team.

In those moments of just cricket, there was the promise of what this series can achieve. Its purpose may be many other things, but what the Pakistani fan wants, and deserves, is to spend a night like this, indulging in their love for the game and little else.

For all the expansive narratives associated with this series, watching Amla was a reminder of the simple pleasures that cricket provides. Let's hope for more of the same.