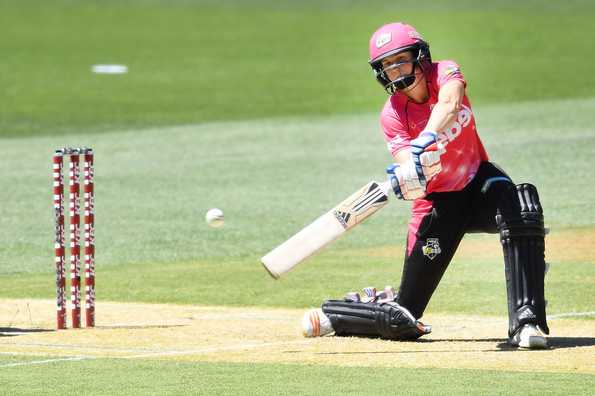 A whirlwind knock from >Ashleigh Gardner< (72 off 45) and Sarah Aley's sensational spell of bowling (4 for 18) powered Sydney Sixers to a 17-run victory, and another WBBL final, where they will have to overcome their last season's title-clash opponents Perth Scorchers to defend the title successfully.

Sydney Sixers were 3 for 1 by the second over after Ellyse Perry opted to bat first. A spot in the final was on the line, and almost as if that was her cue, Gardner walked out and built a match-defining stand with captain Perry. The two added 87 off the next 12.4 overs, of which Perry contributed just 16 runs. Sophie Devine hit back, to pick her second wicket of the game - sending Perry back for a 31-ball 16.

Less than a couple of overs later, the Gardner juggernaut was brought to a halt - as she was stumped off Amanda Wellington. As she walked back, Sixers had 104 runs on the board, 72 of which came off Gardner's willow. Her blitzy knock took just 45 balls and included five fours and six sixes. Erin Burns's 17-ball 25 was a valuable late addition as Sixers ended on a gettable 138 for 5 in 20 overs.

Sixers' title-winner from last season - medium-pacer Sarah Aley - went about her business of rattling the Adelaide Strikers' run-chase. The batters didn't take the pressure of the big game too well, as Strikers were down to 23 for 6 by end of the powerplay overs. No.4 batter Tammy Beaumont watched helplessly from the other end as three wickets fell with just the addition of a single run, leaving her with a massive task.

There was no giving up already, as she stitched a partnership with No. 8 Megan Schutt. But that lasted only till the 14th over, as Schutt was trapped leg before by Erin Burns. The No.9 batter Alex Price provided some support too, as Beaumont kept the chase alive. But another medium-pacer - Sarah Coyte - had the half-centurion plumb in front of the stumps to nearly bring down the curtains on the run-chase.

From 95 for 8, Strikers dragged their innings till the last ball, but finished well short - on 121 for 9.