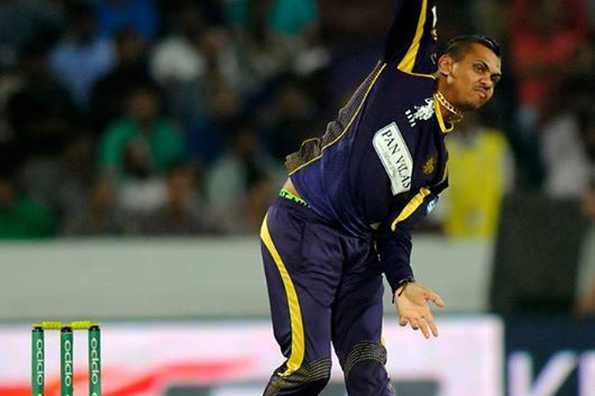 Just a short while after Kolkata Knight Riders (KKR) won the Champions League T20 (CLT20) 2014 semi-final game against Hobart Hurricanes, the 2014 Indian Premier League (IPL) champions suffered a big setback. Sunil Narine was reported for chucking for the second time in the tournament, which means that he will no longer be allowed to bowl in the ongoing tournament.

The mystery spinner from West Indies, was first reported during the game against Sunfoil Dolphins, with the officials finding fault with his quicker delivery. Now that he has been reported for the second time, he will be banned from bowling in any Board of Control for Cricket in India (BCCI)-organised tournament.

On-field umpires Rod Tucker and S Ravi, as well as third umpire Vineet Kulkarni, felt that the bowler flexed his elbow beyond permissible limits and laid the charges.

"Kolkata Knight Riders player, Sunil Narine will not be eligible to bowl in the Oppo CLT20 final following a report on his suspected illegal bowling action. Mr Narine was reported for a second time in as many matches during this evening's semi-final game against Hobart Hurricanes at Rajiv Gandhi Stadium, Hyderabad," stated a CLT20 media release.

"After all video evidence of the match was taken into account, on-field umpires Rod Tucker and S. Ravi, along with third umpire Vineet Kulkarni, felt that there was a flex action in his elbow beyond the acceptable limit when bowling during the match," it added.

KKR can select Narine for the CLT20 final, but he will not be able to bowl in any tournament organised by the BCCI until he is cleared.

"Under the CLT20 Suspected Illegal Bowling Action policy, if a player receives a report while on the warning list, the player shall be suspended from bowling for the remainder of the tournament and from bowling in any matches organised by the BCCI until such date as he is cleared. Mr Narine is suspended from bowling, but may continue to be selected to play in matches, however he will not be entitled to bowl," the release stated.

The release further stated that the Kolkata team will be advised to send the spinner to the Sri Ramachandra Medical College (SRMC) in Chennai for testing. This is an International Cricket Council (ICC)-accredited centre for testing bowlers with suspect action.

It is important to note that being reported for suspect action in CLT20 does not affect a player's international career.