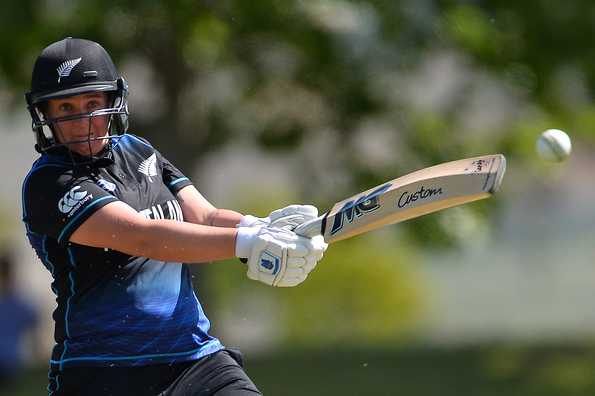 The Women's 50-over World Cup starts in less than a week and the warm-up games kick-started on Monday (June 19), with New Zealand taking on India in first match at the County Ground in Derby. The Suzie Bates-led side steamrolled past the Asian team to record a 7-wicket win.

>Mithali Raj< won the toss and decided to bat first. The in-form openers Poonam Raut and Deepti Sharma got India off to a steady start, not losing wickets until the 9th over. However, they lost two in quick succession as Deepti and number three Smriti Mandhana departed cheaply.

Skipper Raj and Raut consolidated to add a 40-run stand and just when things seemed to have settled down, New Zealand struck in regular intervals to bowl India out for 130. The last eight wickets fell for just 70 runs. Only three Indians registered double digits; >Poonam Raut <(33), Mithali Raj (21) and Mona Meshram (30).

The wickets were split among all the New Zealand bowlers. The trio of Anna Peterson, Erin Bermingham and Hannah Rowe accounted for two wickets apiece, while Sophie Devine, Holly Huddlestone, Amanda Kerr and Bates scalped one each.

The target was not intimidating and New Zealand could afford to take their time. Openers Bates and >Rachel Priest< added 72 for the first wicket and even though Amy Sattethwaite was sent back for nought, there was enough batting in the shade to see them through.

>Katey Martin< and Devine also had some time in the middle as the duo strung together a 28-run partnership that eventually took New Zealand over the line.

The Indian team were left with a lot of unanswered questions as they played the warm-up with their best possible XI and still could not put up a fight. Meanwhile, New Zealand look like a well-oiled unit as they reached the target of 130 with almost 24 overs to spare.

The two teams have one more game before the tournament proper to get things right. India play Sri Lanka on Wednesday (June 21), while New Zealand take on hosts England on the same day.