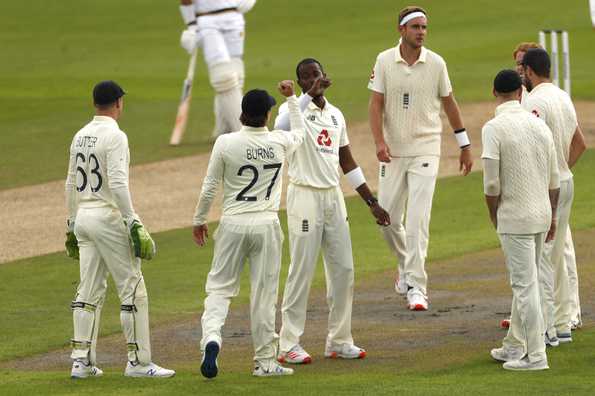 It took just about an hour to establish that Pakistan are going to be much more of a threat with the bat than the West Indies. And it took about an over from Jofra Archer to underline the challenges awaiting the visitors in this three-Test series.

At Lunch on Day 1 of the first Test, Pakistan found themselves at 53 for 2, a somewhat disappointing scoreline after their openers Abid Ali and Shan Masood put on 36, keeping James Anderson and Stuart Broad wicketless in windy, bowling-friendly conditions for all of the first hour. But Archer struck on the other side of the drinks break, bowling Abid Ali through the gate after softening him up with a couple of bouncers.

Until then, Abid had done well to keep out Anderson, who was bowling fuller than usual, and Broad, bowling much like he did against the West Indies: full and straight. But unlike Kraigg Brathwaite and John Campbell, Pakistan's openers weren't stuck in the crease and even left the ball better.

It didn't mean that it was all pretty. Left-handed Masood had a tough time facing James Anderson from over the wicket, getting beaten as many as three times in the first couple of overs. Broad made him play more from round the wicket, but he managed to hold his ground notwithstanding a couple of soft edges past the slip cordon. Abid, his opening partner, didn't have much strike in the first half hour of play, but had his fair share of troubles and luck when he did. One of the outside edges off his bat nearly had him caught by Rory Burns at gully.

Azhar Ali's lbw for a duck by Chris Woakes then propped up England. The Pakistan captain, suspecting an inside edge, immediately went for the review, which returned three reds instead and left Pakistan one review short. Babar Azam was then turned inside-out on his very first delivery of the series, summing up the tough batting conditions at play.

Earlier, Pakistan opted to bat first, picking two legspinners in Yasir Shah and Shadab Khan. England, on the other hand, stuck to their team combination from the third and final Test against the West Indies. Ben Stokes wasn't 100 percent fit to bowl, meaning Woakes got picked over Zak Crawley.