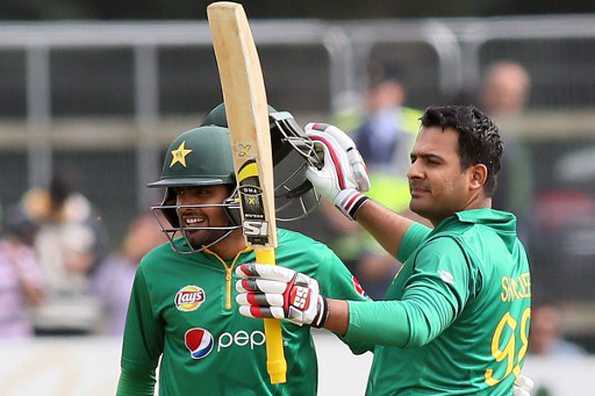 Sharjeel Khan scored his maiden One-Day International century to propel Pakistan to a 255-run win - their highest-margin victory in ODIs - and snatch a 1-0 lead in the two-match series against Ireland at The Village in Dublin on Thursday (August 18).

The opener hammered a 86-ball 152, the third-highest score by a Pakistan batsman in ODIs, to help the visitors post 337 for 6 in the allotted 47 overs after wet outfield delayed the start. In reply, Ireland folded for a paltry 82 in 23.4 overs as Imad Wasim bagged first fifer in ODIs.

Asked to bat, Barry McCarthy nipped out Azhar Ali (1) in the fourth over. There was little to cheer for the hosts after that as Sharjeel and Mohammad Hafeez started the rebuilding job. While Hafeez was happy to play second fiddle, Sharjeel refused to get bogged down by the early wicket.

He continued to flay the bowlers with disdain and cantered to his half century off 34 balls. He celebrated the landmark with three consecutive boundaries off Peter Chase to ensure the runs kept flowing. For most part of his innings, Sharjeel looked on course to join the elite club of double centurions in ODIs.

Chase, after taking some severe beating, got rid of Hafeez to end a threatening stand. The Hafeez-Sharjeel collaborations fetched Pakistan 90 before former was caught by William Porterfield.

Soon after the dismissal, the left-hander raced towards his century by picking up 23 runs in the 21st over when he stroked three sixes and one boundary. He got to the three-figure mark with a boundary to fine-leg in 61 deliveries. He eventually fell in the 32nd over when he was caught behind off McCarthy.

The wicket was just what Ireland needed as Pakistan wobbled, falling from 226 for 3 to 227 for 5. Shoaib Malik (57 not out) and Mohammad Nawaz (53), however, ensured the advantage gained by the fierce century wasn't let to slip. They scored 106 for the sixth wicket to lift the team past the 300-run mark and set a daunting target.

Ireland would have been served best if they could have come up with a fighting reply. However, they crumbled under the scoreboard pressure with as many as seven batsmen walking back to the hut with single digit scores next to their name.

Mohammad Amir's inswinging delivery - the second of the innings - turned out too good for Paul Stirling (0) as the opener's woodwork was disturbed. Ed Joyce (9) and Porterfield (13) huffed and puffed to take the score to 22 before the hosts nosedived towards defeat.

Both Porterfield and Joyce fell to Umar Gul, who returned to ODI cricket after a 16-month break. From 22 for 1, Ireland fell to 55 for 6 with Gul and Wasim running through the middle-order.

There was little resistance from the lower-order as they couldn't avoid a massive defeat in front of the home crowd.