Crisis has always been looming over the South African cricket ever since racism and corruption allegations were made against the CSA board. Now the things have worsen so much so that the South African team could face ban from international cricket by ICC. Thus, this puts its upcoming series in jeopardy.

Following a series of turn of events, the SASCOC or South African Sports Confederation and Olympic Committee suspended the Cricket South Africa. Thus, it ceased operation until further notice. This is in direct conflict with the ICC rules which states that the central government must not interfere in cricketing matters of a country and there should be a separate entity to oversee the state of cricket in the country. Because CSA was the entity responsible for cricketing affairs in South Africa, its ommission means there is no governing body. While an official statement from ICC is still awaited, cricket experts believe that it could potentially suspend international cricket temporarily. 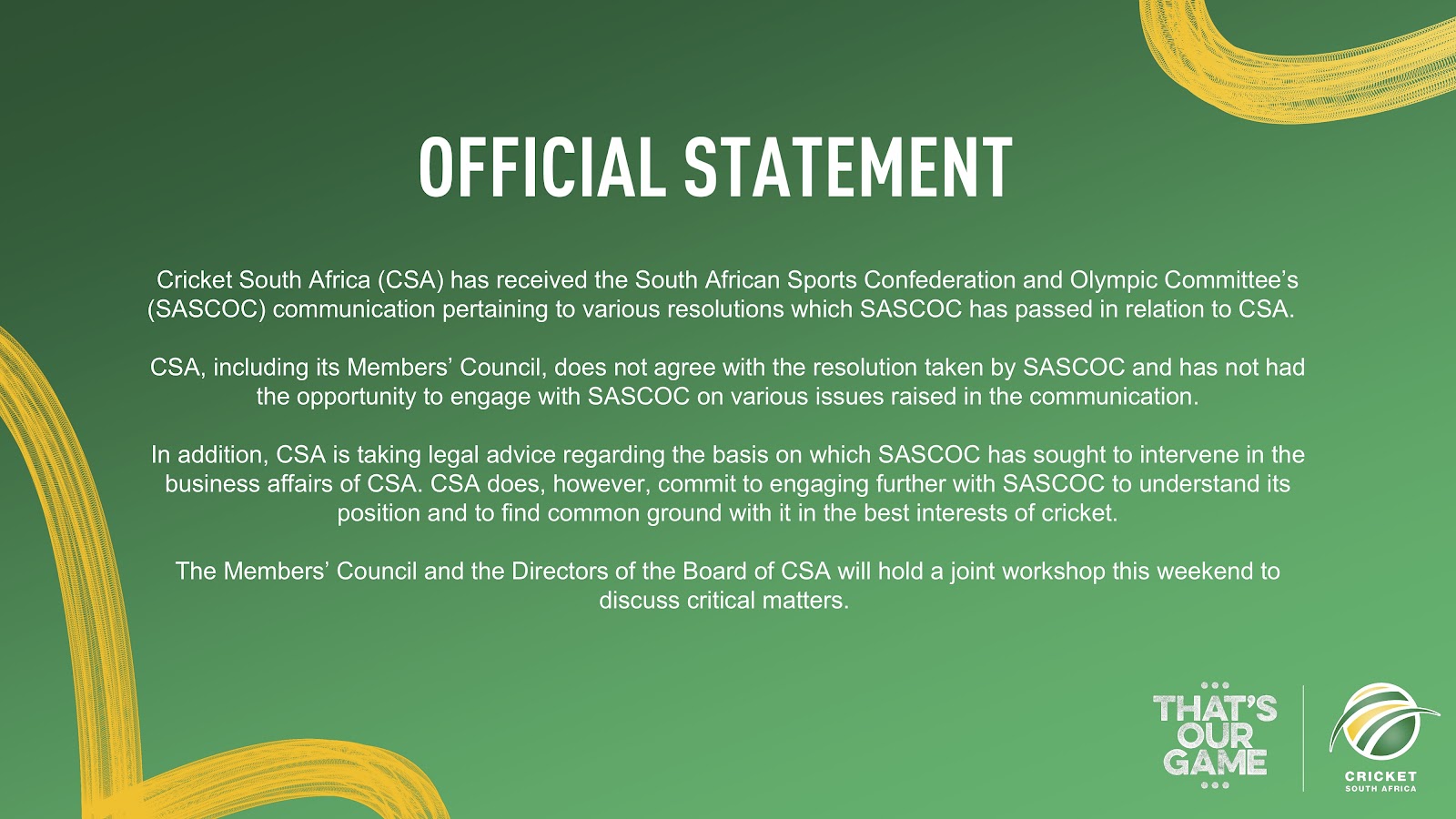 As per the response from CSA on Twitter, it is still taking legal advice to better deal on this matter with SASCOC.

The main reason cited by SASCOC was unstable governance. In the last three years, CSA saw four CEOs namely, Haroon Lorgat, Thabang Moroe, Jacques Faul, and Govender. During their respective tenures, CSA faced revenue losses, lost sponsors, and had a bitter relationship with the South African Cricketers Association. On top of it all, CSA failed to successfully launch the T20 Global League in 2017 which many were considering will rival the likes of IPL and Big Bash.

SASCOC, which is the umbrella body for governing sports in the country, was disappointed with CSA since long. Earlier this month, it had asked the CSA officials to step down and cease operation.

Explaining the takeover to the ICC, SASCOC argued that its intervention should not be considered as government interference. In its letter to ICC, it wrote,

"SASCOC rejects any allegation or insinuation that the SASCOC intervention constitutes Government interference. At no stage does or did SASCOC act under the direction or control of the Minister of Sport in the country, or the Government of the Republic of South Africa. The Board exercises its judgment independently of Government, or any other outside influence"

A final decision from ICC is still awaited on this.

Will South African players be consequently banned from IPL 2020?

IPL is a BCCI-regulated domestic tournament. All players take part in it via a contract that is made with BCCI and the home cricketing board, which in this case is CSA. In case of any suspension of board by ICC -- like the one that happened with Zimbabwe last year -- players cannot take part in any ICC-affiliated events. Since IPL is not an ICC-affiliated event, they'd have no problems playing IPL. This is unless BCCI decides against their participation which is unlikely.