Stirling, Rashid Khan in record books after a game of memorable performances 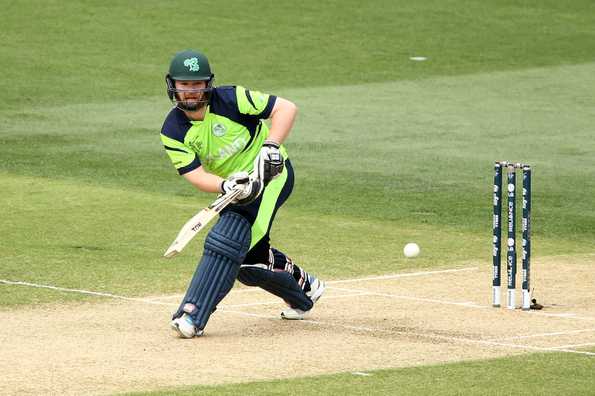 Afghanistan beat Ireland in a fifth consecutive match and took a 2-0 lead in the ODI series on Friday (March 17). Skipper Asghar Stanikzai scored his maiden ODI hundred to take his team to 338. Paul Stirling was the pick of the Ireland bowlers, taking 6 for 55 and following that effort with an outstanding 80-ball 95 to keep his side in the hunt. Rashid Khan was once again Ireland's chief tormentor, taking 6 for 43 to snuff out any hopes of Ireland ending their tour duck immediately.

Stats highlights from the second ODI:

338 by Afghanistan is their highest ODI total, eclipsing the 302 for 5 they made against UAE in Kuala Lumpur in 2014. There are only two higher aggregates by Associate nations in ODIs - 347 for 3 by Kenya against Bangladesh in Nairobi in 1997 and 341 for 9 by Scotland against Canada in Christchurch in 2014.

101 by Stanikzai is the highest score by any player leading Afghanistan in ODIs. The previous highest was 77 by Mohammad Nabi against UAE in Kuala Lumpur in 2014. Stanikzai also went past his previous highest individual score of 90*, scored against Bangladesh in Fatullah in 2014.

92 runs conceded by Peter Chase is the second-most by an Ireland bowler in an ODI. The most runs conceded is still 95 - an unenviable feat shared by Peter Connell ( against New Zealand in Aberdeen in 2008) and Kevin O'Brein (against South Africa in Canberra in 2015).

1 This was the first instance of two bowlers taking six wickets in the same ODI. Paul Stirling picked up 6 for 55 for Ireland while Rashid Khan returned with figures of 6 for 43 for Afghanistan. These two are the best figures for respective teams in ODIs.

Best figures for Associates in ODIs

The previous best for Ireland was 5 for 14 by Trent Johnston against Canada in Centurion in 2009 while Rahmat Shah's 5 for 32 against UAE in Kuala Lumpur in 2014 was Afghanistan's best.

6 Stirling became the sixth player overall and first from Ireland to score a fifty and take six wickets in an innings. He narrowly missed becoming the third player to score a century and take a five-fer in the same ODI after Viv Richards and Paul Collingwood. Stirling now holds the record for the highest individual score as well as best bowling figures for Ireland in ODIs (177).

Fifty-plus and six wickets in the same ODI

*In the above list, Stirling is the only player to score a fifty in the second innings after taking six wickets in the first innings.

At 18 years & 178 days, Rashid Khan became the second-youngest player to take a five-wicket haul in ODIs. Waqar Younis, who took 6 for 26 against Sri Lanka in Sharjah when he has 18 years and 164 days, is the youngest to that distinction. Incidentally, Waqar followed that feat with a 5 for 26 against New Zealand at the same venue, two days layer.

203 The aggregate opening partnership in the second ODI - Afghanistan 90 and Ireland 113. There have been just two bigger aggregates in ODIs between two Associates - 207 in the Scotland vs Ireland clash in Aberdeen in 2009 and 205 in the Bermuda vs Kenya game in Potchefstroom in 2009.

642 The aggregate of 642 runs in the ODI is the second most in an ODI involving two associates. The only higher aggregate was 643 runs in the game between Ireland and Scotland in Edinburgh in 2011.

6 Man of the Match awards for Paul Stirling- the most for an Irish player in ODIs. Among Associate teams, only Steve Tikolo (nine) and Ryan ten Doeschate (seven) has won more while Thomas Odoyo also has six.