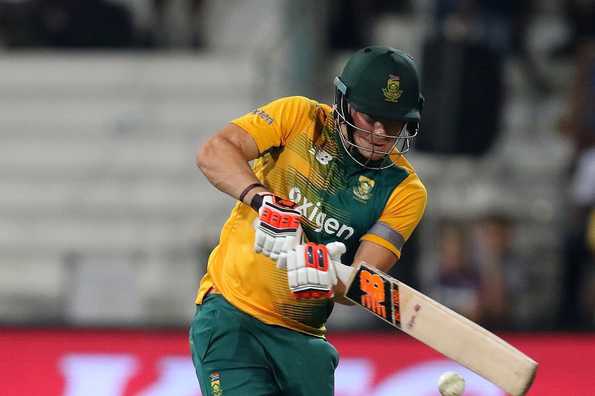 The three-match Twenty20 International (T20I) series just ahead of the ICC World T20 gives both South Africa and Australia a good chance to polish off the rough edges. However, after the first T20I at Kingsmead in Durban on Friday (March 4) it was South Africa who ticked most boxes, but both teams were still left with some questions ahead of the tournament in India. Australia batted first and posted 157 for 9 but not before they were made to huff and puff for it. In reply, South Africa fired in patches before crossing the line with four balls left courtesy David Miller's unbeaten 35-ball 53.

Unlike Australia, South Africa wobbled early and did well to recover from it. Nathan Coulter-Nile struck a telling blow and had AB de Villiers caught behind on the first ball of the second innings. Quinton de Kock followed soon after and the hosts were in the middle of a wobble at 17 for 2. Faf du Plessis did well to hold one end up even as the batsmen failed to bat around him. JP Duminy looked out of sorts and pulled one straight to Aaron Finch in the sixth over.

However, another significant blow came courtesy Peter Nevill. Du Plessis looked set to carry the team forward and had raced to a 26-ball 40. Trying to steal a non-existent single, du Plessis was caught short by a direct hit from the Australian wicketkeeper.

The fact that South Africa bat deep meant they were still in with a very good chance. Miller struck 16 runs in the 16th over to bring the equation down to 29 off the last four overs. There wasn't much drama after that and Miller's innings ensured South Africa travel to Johannesburg leading the series 1-0.

Earlier, not many would have thought that Australia's over-aggressive approach would hurt them. Steve Smith called right and chose to bat without any hesitation.

Credit where due, the curator did well to produce a pitch with not a blade of grass in it to give the teams a chance to prepare for the World T20. While the pitch didn't offer much help, there was enough help for the spinners to exploit.

Australia got off to a brisk start but lost Usman Khawaja (9) early. And then the carnage began. David Warner walked in with intent and raced to 11-ball 20 but it was Finch's show that left the hosts searching for answers. Duminy was introduced into the attack in the fifth over and Finch's onslaught meant he bowled just one. The fifth over of the innings read - 6, 6, 6, 4, 0, 2. With 24 runs from that over, Australia had raced to 54 for 1 in five, and then 69 for 1 by the end of the powerplay.

The visitors were motoring along in the match and considering the short boundaries, they knew 180 would be a par total. However, on the day, that wasn't the case. The avalanche began in the seventh over and by the end of 16th over, Australia, from 69 for 1, slipped to 114 for 7.

If this performance is anything to go by, there will be huge concerns in the Australian camp. They look out of sorts against Imran Tahir's spin. Warner cut one to point and soon after that Finch managed to deposit a full toss from Tahir (3 for 21) straight into the hands of Kagiso Rabada at deep midwicket. Steven Smith (6 off 17) was scratchy and failed to get going, and so did Glenn Maxwell (17). It was Mitchell Marsh's 25-ball 35 that lifted the team past the 150-run mark.

No score above 150 had been chased in Durban in any T20Is before this and at the half-way mark, Australia were in with a very good chance. Even when du Plessis threatened to take the game away from them, the bowlers struck back. However, Miller had made up his mind that he and his team won't be denied.