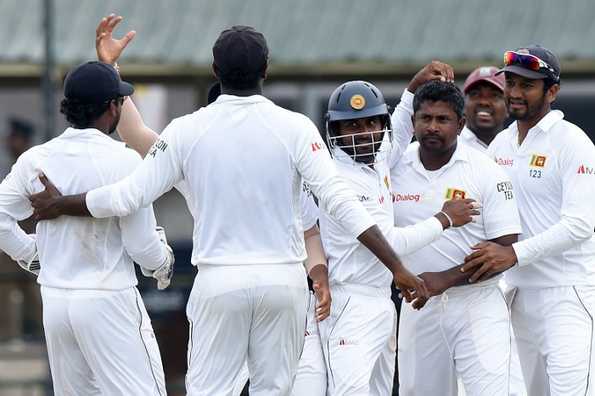 Shai Hope throws his wicket away. Sri Lanka break the stand that threatened to bring stability to the West Indian chase. The delivery was tossed up, to which Hope came down the track. The ball dipped onto him. There was a puff of dust and the ball spun across the face of the bat and Perera took off the bails easily. The puff of dust will be a cause of concern for the visitors. West Indies are on 80/2, without scoring a run in the last three overs. Key session of play here for the two sides.

Persistent rain meant that no play was possible at all on Day 4. West Indies resume on Day 5 of the second Test needing 224 more to register their first win on Sri Lankan soil. The visitors have nine wickets in hand but will have to come up with their top game if they are to keep Rangana Herath and Co. at bay. Sri Lanka, meanwhile, will be looking to pick up early wickets to put pressure on West Indies.

Darren Bravo's fine stroke-making was on display as he, along with Shai Hope, took West Indies past the fifty-run mark in their chase of 244. After day four was washed out, West Indies will need to the make the most of the three sessions on offer today. They've started well, have effectively run between the wickets, have scored the odd boundaries. The onus will be on the top order to see them through.

Darren Bravo takes on Rangana Herath for a couple of boundaries and takes the stand between him and Hope past 50. The partnership stands at 55 from 80 balls. West Indies still need 168 runs to win.

Dilruwan Perera strikes to get Marlon Samuels for 6. Samuels edges one to first slip, where Angelo Mathews takes a sharp catch. The TV umpire was called upon to check the legality of the catch. He finds evidence colclusive enough to stay with the on-field umpire's decision. Samuels has to go. Jermaine Blackwood joins Bravo at the crease.

Just when one thought West Indies made a good start in the first session, Sri Lanka bounced back to pick up three quick wickets to peg the visitors back. Siriwardana traps Jermaine Blackwood right in front. The batsman reviews, but the ball is found to be hitting leg stump. The decision stays. Blackwood has to go. West Indies slip to 102 for 4.

Bravo gets to another fifty while wickets tumble at the other end - a situation that he would be way too familiar with.

After West Indies' strong start to the day, Sri Lanka bounced back really well to pick up three quick wickets of Shai Hope, Marlon Samuels and Jermaine Blackwood to take the session. Darren Bravo, unbeaten on 55 is the only man standing tall. Denesh Ramdin is in the middle on 4 as the players step out for the lunch break. Both teams are in with a chance to win this Test. The middle session will be a crucial one. West Indies for into lunch at 112 for 4; still requiring 132 to win with six wickets in hand.

Rangana Herath strikes a double blow to dismiss both Darren Bravo (61) and Denesh Ramdin (10) in similar fashion in the same over. Angelo Mathews pouches two good catches at slip. West Indies' required runs of 119 beginning to look a bit steep now with six batsmen back in the shed. Bravo's wicket was the key one for Sri Lanka. They are more likely than not already sniffing victory.

West Indies slipping fast now. Jason Holder is trapped by a beauty from Siriwardana and is adjudged leg before wicket. West Indies are now 133 for 7. From the number of runs West Indies require to win, the equation has turned around to how many wickets Sri Lanka need to take the series 2-0.

Can't keep Herath or Siriwardana out of the action. Both come together to dismiss Jerome Taylor. The West Indian bowler charges at a delivery off Herath and hits it straight to Sirirwardana in the deep who accepts it gracefully. Sri Lanka need two more wickets to win.

When we thought it was the spinners that were bothering the West Indian batsmen, Devendra Bishoo found another way to get himself out. Kemar Roach goes for a drive and gets a thick edge that rolls past Angelo Mathews, who gives it a chase. After two runs being completed, the batsmen go for the third and Bishoo finds himself eventually short. Goes for a duck. The hosts are a wicket away from wrapping up the series.

Herath ends proceedings at the P Sara Oval with having Kemar Roach hand Mathews another catch. We've witnessed a ridiculous collapse here in Colombo. West Indies slip from 80 for 1 at one stage to being bowled out for 171 to hand the hosts a win by 72 runs. Sri Lanka whitewash the Jason Holder-led side to take series 2-0.

West Indies will hope to be more competitive and offer more of a fight in the limited overs series that will comprise of three One-Day Internationals and two Twenty20 Internationals. Given that there will be a change in guard, there is hope for them to pose more of a challenge to the home side than the Test side did.

The first of the three ODIs will be played on November 1.