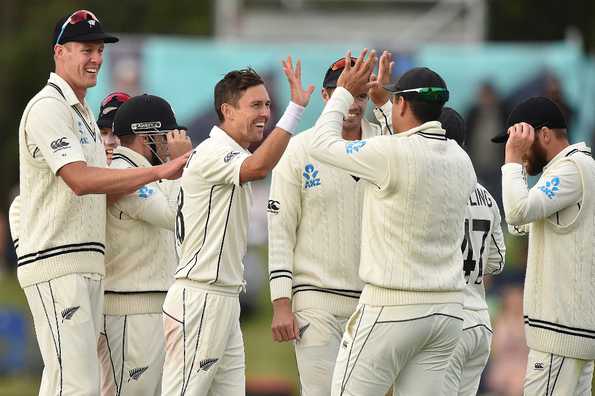 India could add just 34 on the third morning and folded for 124 to set New Zealand a target of 132 for a series sweep. New Zealand were 46 for no loss at Lunch - needing just 86 more.

Any hopes of an Indian fightback were nipped early when Hanuma Vihari was strangled down the leg side by Tim Southee. Rishabh Pant failed to come to terms with the tricks from Trent Boult and was caught behind for 4 as India lost three wickets in the first half hour. Boult toyed with Pant, getting the ball away, then bringing it back in and eventually floated one outside off to force Pant to poke at it. It was masterful and all too easy for the quick as India slipped to 108 for 9

Ravindra Jadeja was left with no choice but to attack with only Jasprit Bumrah left for company. There was a handsome six and a boundary before Bumrah's run out ended things for India. Boult, who was the chief destructor on the second day, ended with four while Southee bagged three to leave the hosts with a relatively easy chase.

The Indian pacers weren't able to extract the same kind of venom that Boult did but managed to create a few chances. Both Tom Latham and Tom Blundell started positively to score 31 in the first ten overs. Drives and cuts and pulls were on show from both openers but there were plenty of play and misses as well. Pant dropped Blundell off Jasprit Bumrah in the ninth over when the batsman was on nine only to make matters even worse.