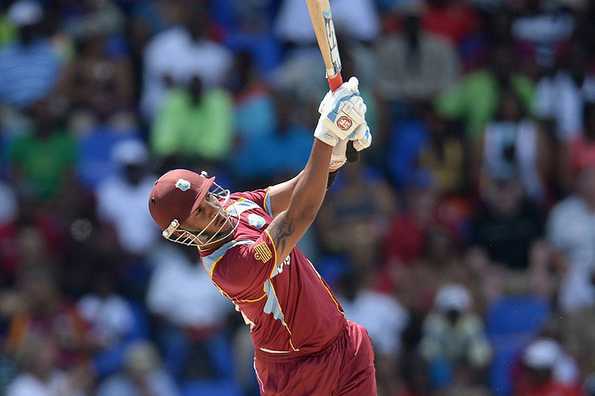 Lendl Simmons carted 10 sixes and five fours on his way to jaw-dropping 91* off 40 balls as West Indies made mincemeat of Ireland's above average total of 138 in the series finale in St. Kitts. Having been stunned in the series opener - by the slightest of margins, West Indies' hopes of going into the last game on level terms was scuppered by rains.

Kieron Pollard had bowled his heart out, producing his career-best spell (4 for 25), only for showers to kill the game right at the start of their chase. Ireland went into the final fixture with a series lead, and the opportunity to create history with a series win, but their flight of fancy was brought down crashing to earth via West Indies' thorough all-round performance.

If the first three overs of the game was anything to go by, Ireland once again showed gumption to post a high, 200-plus total. They had 48 runs on the board by the end of the third, thanks largely to Kevin O'Brien who raced away to 35 off 15, which included a Sheldon Cottrell over riddled with five successive boundaries. But Ireland's march towards maximising the PowerPlay was cut short by the experience that Pollard and Dwayne Bravo brought to the West Indies side. They took out both openers - O'Brien and Paul Stirling - in the space of seven deliveries.

From 61 in 6 overs, captain Andrew Balbirnie set out to carry forward the consolidation job but was devoid of a stable batting partner at the other end. In less than five full overs since the PowerPlay, Ireland lost four more wickets - including that of Balbirnie - to put themselves en route to an underwhelming total. Pollard followed his 4 for 25 with another fine spell of bowling at the same venue, finishing with 3 for 17 while Bravo too accounted for three dismissals. The utter collapse in the middle-order - with five of the batsmen contributing single-digit scores - saw Ireland fold for 138 in the 20th over, giving West Indies a clear shot at series parity.

West Indies took it, and how. Simmons began the carnage against the medium pace of Barry McCarthy in the second over, hitting him for 15 runs and bettered that against Craig Young in the sixth, with 16 to the tally. Ireland fired blanks in their quest for early breakthroughs as West Indies waltzed to 57 for 0 in 6 overs. Simmons made up his mind to not offer any respite that generally accompanies the relaxation of the field restrictions, as he brought up a 28-ball half-century with a six.

There just was no restriction to Simmons's six-binge. At the halfway stage, West Indies had already polished off 123 runs, with Simmons smashing 85 off it - which included nine sixes. Though Lewis was dismissed in the 11th over - giving Simi Singh and his teammates something to cheer about - Simmons took his sixes tally to double digit and sealed the game in style.