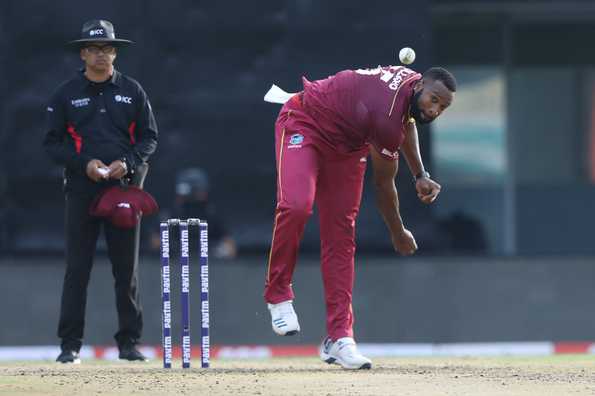 Rain had the last say in Basseterre as the keenly-contested second T20I between West Indies and Ireland was abandoned early into the chase, scuppering the hosts' chance to draw level in the series after a stunning defeat in the Grenada opener.

Showers had been forecast in the build-up to the contest and before the first interruption could hit the game, West Indies had taken full advantage of the conditions by electing to bowl on a helpful pitch and dismissing Kevin O'Brien - one half of that stunning opening assault in the first game. There was no encore from Paul Stirling when play resumed after an hour's delay as he was sent packing for 17 by Sheldon Cottrell, forcing the visitors into a period of reassessment.

Captain Andrew Balbirnie and Gareth Delany turned the tide with an enterprising 72-run stand off just 43 deliveries, with 10th over of the innings - bowled by Hayden Walsh Jr - proving to be the highlight of their day. Delany (44 off 22) smashed four consecutive sixes off the leggie, one of which hit the upper deck of the grand stand straight down the ground, and another that cleared it.

West Indies were in dire need of some bowling smarts and it was their captain, Kieron Pollard, who brought oodles of it at a time when Ireland were looking to step it up to another gear. Pollard served up an assortment of variations, his changes of pace proving particularly difficult to blast through. In successive overs, he removed both Delany and the Balbirnie and suddenly sent Ireland into a tailspin.

Pollard added two more wickets - those of Gary Wilson and George Dockrell - to register career-best figures of 4 for 25 in T20I cricket but Harry Tector's 23-ball 31 allowed the visitors to reach a competitive 147/9 from 19 overs, with an over lost after a lengthy second rain delay.

Ireland made a strong start when stand-in skipper Stirling (Balbirne suffered a hamstring strain) brought himself on and dismissed Lendl Simmons in the first over. But Ireland were denied a chance to push for a first series win against a full member moments later as the heavens opened up for the third time, forcing the officials to call off the game.