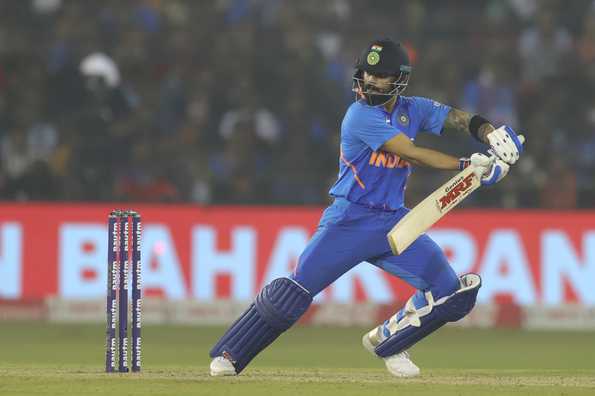 Vital half-centuries from India's top-three laid the base of their come-from-behind 2-1 series win against West Indies in a evenly-contested decider at the Barabati Stadium in Cuttack, on Sunday (December 22).

None of Rohit Sharma, KL Rahul or Virat Kohli could convert their knocks into a hundred, but their collective effort augmented by a finishing act from Ravindra Jadeja and Shardul Thakur saw India complete the nervy 316-run chase with nine balls and four wickets to spare.

Set a competitive target, after West Indies plundered 135 in the final 12 overs of their batting innings, India were off to a flying start courtesy brisk half-centuries from their openers. They lost their way in the middle overs though, plummeting to 228 for 5 in a collapse triggered by Keemo Paul's three-fer. Kohli put India on the brink with a calculated chase before Jadeja and Thakur sealed the deal three balls into the penultimate over.

The expected "heavy dew" but nonetheless the match was not predicted to get as close as it eventually did given the start Rohit and Rahul provided. India's newest opener pair put together 122 runs in quick time to get India going, also aided by some lax fielding by the visitors. Rahul followed up his Visakhapatnam hundred with a 49-ball fifty, and Rohit followed suit soon after to help India keep up with the asking rate.

Jason Holder got West Indies a breather with the wicket of the Indian vice-captain. Rohit attempted an uppish drive off a length ball outside off, and ended up edging it to the keeper to fall for a run-a-ball 63 that included eight boundaries and six. Kohli replaced him in a middle, putting on 45 runs with Rahul before Alzarri Joseph managed to send back the second set opener.

The pacer deceived Rahul with extra pace and bounce, furring him into his attempted pull to induce an edge that Hope, again, safely pouched. The wicket opened a comeback window for West Indies, who struck at regular intervals in the next nine overs to not allow India a steady partnership.

Paul took out Shreyas Iyer cheaply with another short ball, while Rishabh Pant dragged one back onto his stumps. Kedar Jadhav too was in and out in a jiffy, giving Sheldon Cottrell a second scalp. Kohli though stood tall amidst the ruins, keeping India on par with the required rate almost singlehandedly. He was happy to play the second fiddle as long as a well-settled Rahul was in the middle, but once the opener departed, the Indian skipper took charge as he pulled Joseph twice on consecutive balls.

Surviving a run out scare shortly after raising his 51-ball half-century - the first of the series - Kohli look on Khary Pierre to bring the equation down to 53 off 42.

Kohli and Ravindra Jadeja transferred the pressure back on West Indies with their quick running between the wickets as India's asking rate plummeted steadily once again. India were merely 30 shy of the target when Paul found his third victim in the Indian skipper.

Kohli, after guiding the better part of the chase, chased a full delivery wide outside off and dragged the ball onto his stumps to depart for an 81-ball 85 that stunned the Barabati crowd.

Thakur wasn't to be fazed by the key wicket though as he kicked on with a perfectly timed drive through the covers, and followed it up with a boundary and a six more off the Cottrell over that followed to all but secure the game for the hosts

Earlier in the day, it was Pooran and Pollard's counterattacking half-centuries that gave West Indies hope, as it helped the visitors post 315 for 5, a score that had seemed improbable at one point in their innings. The visitors, despite their solid start struggled to pace their innings in the first half until Hetmyer's impetus-providing cameo. That was followed by berserk fifty-plus contributions from Pooran and Pollard helping them finish strong but, evidently, not enough.

While the tight bowling by India's new-ball pair of Shardul Thakur and Mohammad Shami kept the West Indies under a check, the hosts were unable to force an opening until the 15th over. With the series on the line and a belter of a track on offer, West Indies understandably put all their energies in laying a solid platform. And in a sharp contrast to their usual batting styles, Shai Hope (42) and Evin Lewis (21) contributed 57 runs in the opening partnership towards that cause.

Ravindra Jadeja got India the much-needed breakthrough, tempting Lewis with a flighted delivery on the middle, right in Lewis's swinging arc, inviting him to cut loose. The left-hander pounced, only to hole out to Navdeep Saini in the deep. Shami, brought back into the attack in the middle of a spin-dominated period of play, then breached Hope's defences, bowling him through the gap and denying him a half-century by eight runs.

Halfway through their innings, West Indies were still six short of entering triple figures and in desperate need of some acceleration. Hetmyer stepped up - or rather, went down on one knee - and smoked a full ball outside off from Kuldeep into deep midwicket, signalling the change of approach from West Indies. He took apart Thakur's short-ball ploy to quickly fetch 37 runs in his 33-ball stay.

Just as the third wicket pair looked to be settling in, Saini make a strong comeback in his second spell to remove both Hetmyer and Chase in his succeeding overs to further peg the Windies back. Hetmyer was the first to go, pouncing at the short ball only to get a thick top-edge to the man in the deep. Chase, dropped twice early by Rishabh Pant, cost India 38 runs before the debutant yorked him out in the 32nd over.

With two new batsmen in the middle and only 144 on the board so far, West Indies seemed to falling behind. However, Pollard showed the way - clobbering two overpitched deliveries from Kuldeep comfortably over the ropes - and the in-form Pooran followed suit. He took centerstage, going after nearly every bowler en route his stroke-filled 89. The batsman slammed 10 boundaries and three sixes in his counter-attacking knock, adding 135 runs for the fifth wicket partnership, quickly outscoring his senior at the other end and reducing him to a mere spectator as he accelerated from 21 off 25 to a 64-ball 89.

Pooran fell against the run of play when Thakur picked up a consolation wicket in the final of his 10 overs, but Pollard continued the assault to race to his half-century with back to back boundaries at the start of the 49th over. He finished with an unbeaten unbeaten 74, playing a key role as West Indies added 135 in their final 12 overs. The late burst, however, could only get Windies as far as giving India some death bowling worries.