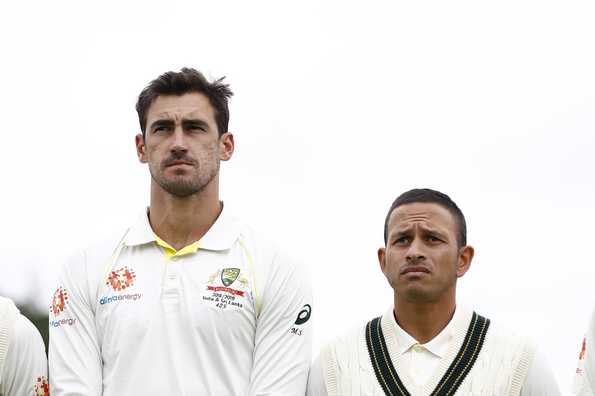 In the final Test of the Australian summer, two of their key players - Mitchell Starc and Usman Khawaja - managed to make a mark, picking up a five-wicket haul and scoring a ton respectively. Both players came into the game under immense pressure with questions being raised constantly over their spot in the side. Having come out of it finally, both players presented a picture of relief at the end of the third day's play.

So much has been the scrutiny around the two that Starc revealed that he resolved to "stop listening to everyone."

"That's probably something I've really done the past four weeks. Not worry about it. It probably wore me down a bit going into new years', then I got off all the social media and haven't read a paper in four or five weeks. That's been the best thing for me, made me feel quite refreshed," he revealed.

Having done that, Starc says that he went back to what was his strength, which was to just bowl fast.

"I've been working on it a fair bit. I had a really nice session with Andre Adams before the Sri Lankan series who is at NSW. And talking to a few people quite close to me who I have worked with over recent years. And putting the rest of the coaching and the other 450 coaches I've had over the past three weeks to the side. And going back to know what I know best. I am my own best coach and I know what's best for me.

The one for me this week was just to run in and bowl fast. Wickets are a wonderful thing. They help everything as well," said Starc.

For Khawaja, the pressure of failures was only enhanced by the off-field issues he had been facing with his brother getting into trouble with the law enforcement.

"I've had a tough summer. I've had a lot of stuff going on off the field which has made things a lot tougher and has been really nice to have my wife, Rach around with me the majority of the tour and she's been awesome, just to have her around and to go and travel with me and she's been my rock throughout the whole thing. Cricket has been frustrating, the Indian series, especially losing 2-1, it was a bit better last game because we won but by the same token you always want to feel like you're contributing and that's the hardest thing, getting lots of starts and not going on with them. It was nice to get a start today and go on with it," said Australia's No. 3.

Talking openly about the issues that were "very taxing mentally", Khawaja reiterated the role his wife had played in getting him out of the space.

"It's been tough, it's something you don't expect to happen. My family's very close to me and I'm very close to my family, so at some level yeah I think it made it tougher to go out and concentrate and execute my skills and at the same time while I was playing cricket you sort of forget about everything because you're only concentrating on cricket, but it was very taxing.

"It has been very taxing mentally, and that's why Rachel has been great, being around and trying to take my mind off things. Feeling a lot better now than I was probably a month or two ago, but its' been a tough couple of months off the field," said Khawaja.

And having got the hundred(s) that he and the rest of his team were chasing all through the summer, Khawaja was most relieved. "There's no feeling like winning a Test match. Getting a hundred then hopefully setting up a game we can hopefully win is the ultimate feeling for the team and yourself."