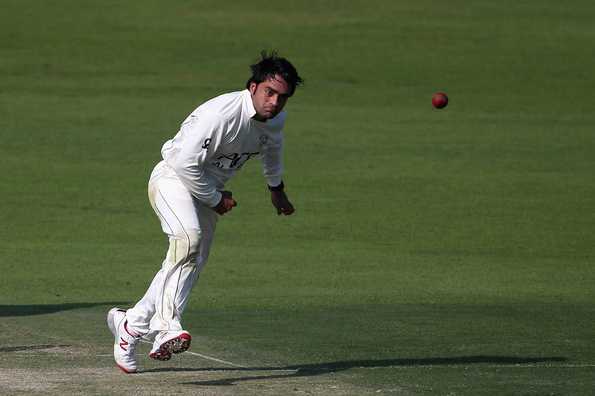 Afghanistan put themselves in a strong position to complete a massive win over Bangladesh in the one-off Test at Chattogram after their spinners picked up four wickets in the second session to leave the hosts reeling in the tall run chase. Chasing 398, Bangladesh cautiously batted the nine overs before the lunch break to score 30 runs but post the interval, Afghanistan seized control.

Liton Das, opening the innings, was given out caught behind in just the second over of the session but he immediately challenged the decision successfully. However, the relief was only short-lived as Zahir Khan took only two more deliveries to get his man as Liton was trapped plumb in front that he didn't even wait for the umpire's finger to completely go up.

Bangladesh then sprung a surprise by promoting Mosaddek Hossain up the order following his gutsy effort in the first innings. He didn't last any longer though making only 12 off 16 deliveries before Zahir lured him with a wide delivery that was mistimed by the batsman with Asghar Afghan judging the catch to perfection running backwards towards long on. The shot came as a surprise considering his approach in the first innings where he batted with the tail to guide Bangladesh past 200.

Mushfiqur Rahim then came out with a positive intent and picked up regular boundaries to move to 22 off 20 at one stage. But Rashid Khan cut short his stay with one that didn't turn at all as the batsman was trapped leg-before-wicket. In his following over, Rashid struck again and this time, it was the big wicket of Mominul Haque, who was the only batsman to cross 50 for Bangladesh in the first innings. The left-hander was rapped on the pads on the backfoot for just 3 to leave his side staring at a defeat.

Skipper Shakib Al Hasan then found himself lucky just before the Tea break with Rashid failing to hold onto a return catch but with the hosts needing another 296 runs, Afghanistan would fancy themselves to wrap this up.